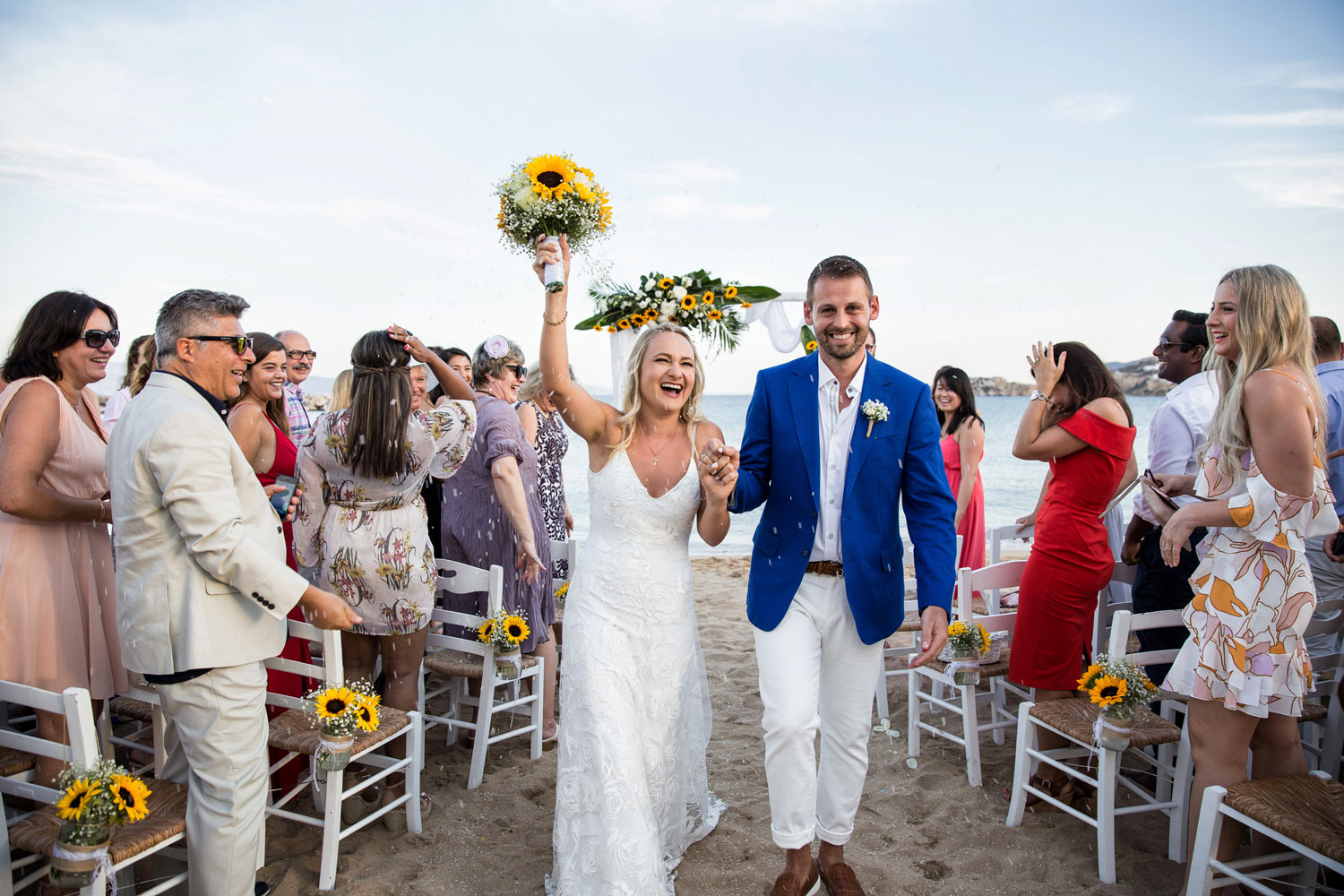 Even though September signals the end of the wedding season and the beginning of autumn, it is one of the best periods to plan your wedding, especially if you are dreaming of having a beach wedding in Paros. The weather is great, not too hot but far from cold, the sea water is clean and beaches are not crowded with people.

Katerina and Andrew were wise enough to decide to get married in Paros last September, and they were generously rewarded for their choice. The day began with the bride and groom preparations in Boudari Hotel on the west side of the island. Once everyone was ready we left the hotel and headed to the ceremony location. On the way, we decided to stop at the beautiful, traditional village of Marpissa for a short couple shoot. It proved to be a great idea not only for the great photos we captured but also because, in the process, the couple got somewhat familiarised with the camera and felt more relaxed in front of the lens.

The ceremony took place in front of Aspro restaurant in Ambelas, the perfect location for an unforgettable beach wedding in Paros. Such a great wedding day could only be ended with loud music and a crazy party that lasted until the early hours.

We use cookies on our website to give you the most relevant experience by remembering your preferences and repeat visits. By clicking “Accept”, you consent to the use of ALL the cookies.
Cookie settingsACCEPT
Manage consent

This website uses cookies to improve your experience while you navigate through the website. Out of these, the cookies that are categorized as necessary are stored on your browser as they are essential for the working of basic functionalities of the website. We also use third-party cookies that help us analyze and understand how you use this website. These cookies will be stored in your browser only with your consent. You also have the option to opt-out of these cookies. But opting out of some of these cookies may affect your browsing experience.
Necessary Always Enabled
Necessary cookies are absolutely essential for the website to function properly. These cookies ensure basic functionalities and security features of the website, anonymously.
Functional
Functional cookies help to perform certain functionalities like sharing the content of the website on social media platforms, collect feedbacks, and other third-party features.
Performance
Performance cookies are used to understand and analyze the key performance indexes of the website which helps in delivering a better user experience for the visitors.
Analytics
Analytical cookies are used to understand how visitors interact with the website. These cookies help provide information on metrics the number of visitors, bounce rate, traffic source, etc.
Advertisement
Advertisement cookies are used to provide visitors with relevant ads and marketing campaigns. These cookies track visitors across websites and collect information to provide customized ads.
Others
Other uncategorized cookies are those that are being analyzed and have not been classified into a category as yet.
SAVE & ACCEPT